Hidradenitis suppurativa (HS) is a recurrent disease without a cure. Nonsurgical treatment rarely results in long-term effectiveness. Several surgical options are available, depending on the location and severity of the disease.1

Surgery is sometimes used for HS that is not controlled well enough by medication. Potential complications of surgery for HS include:4,5

Some doctors recommend that pregnant women postpone surgical treatment for HS until after their pregnancy.6

One study found that about 80 percent of people with HS have had some type of surgical procedure for treatment of their condition. Some people also had multiple procedures. The most frequent procedures were:7

Deroofing, also called unroofing, is a fast, safe, inexpensive procedure. It is easy for surgeons to perform and is effective in mild to moderate HS. It can be performed in a doctor’s office with local anesthesia (numbing medicine applied to the site of the procedure).8 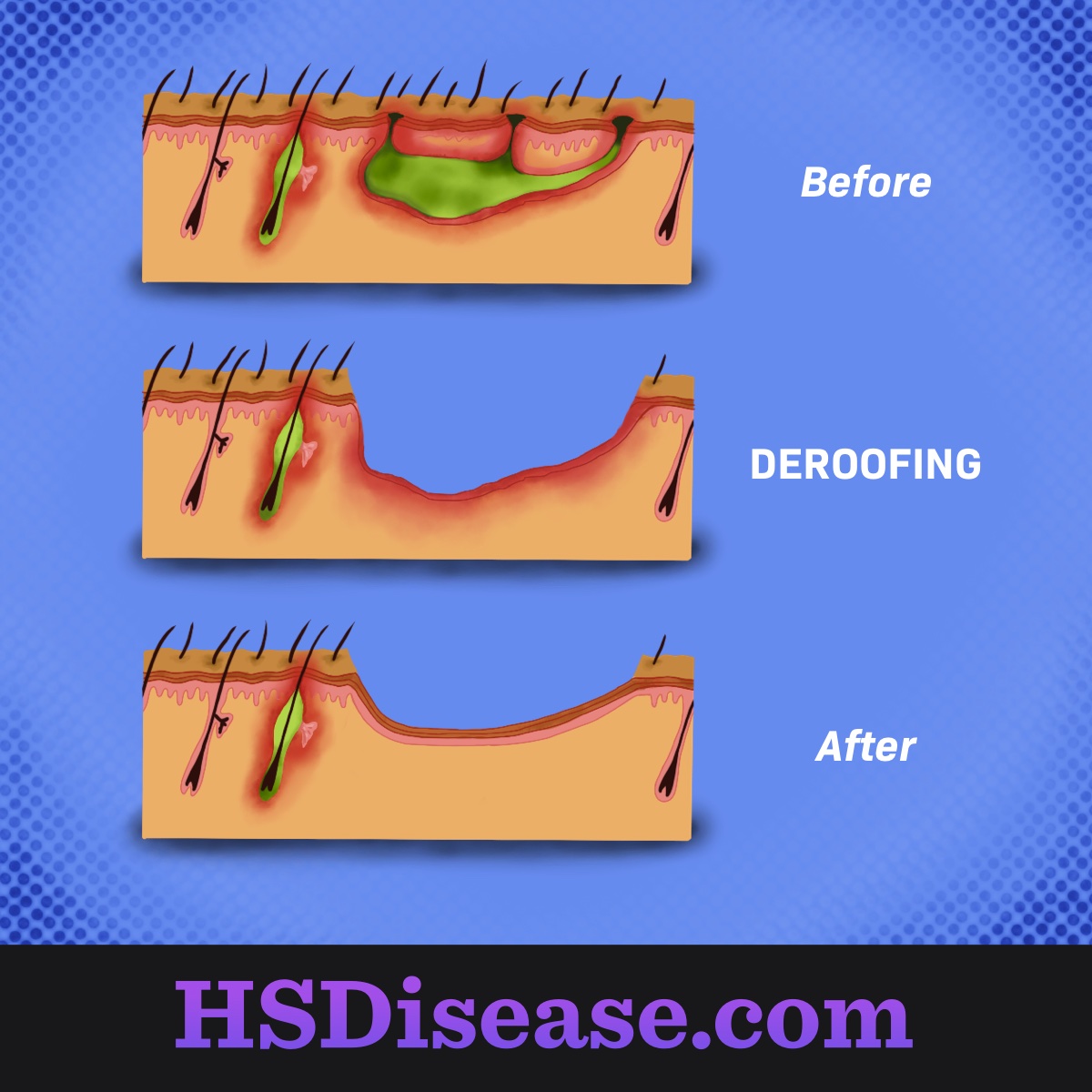 In this tissue-saving procedure, the roof (top surface) is surgically removed from a lesion (sore) and related sinus tracts. The material on the exposed floor is scraped away. Then the wound is left open so it can heal under a dressing. When the wound heals, the scar has an acceptable appearance and does not impair mobility.8

One study found that more than 80 percent of deroofed lesions did not come back after an average follow-up of almost 3 years. Of people treated with deroofing, 9 out of 10 would recommend the procedure to others with HS.8

Incision and drainage for treatment

Simple incision and drainage is used when pain and distress cause a person with HS to seek treatment in the emergency room. It means cutting into a lesion or abscess and draining the pus that is inside. The procedure gives relief when other methods are not possible.4,9

Except for emergency relief, incision and drainage is not recommended. Nearly 100 percent of lesions that are drained this way come back within an average of about 3 months.3,10

Excision (cutting out) of lesions is another common surgical procedure used to treat HS. Doctors use 2 different excision methods, depending on the location and severity of lesions.

Local excision of single lesions is suited for well-defined, limited, mild to moderate HS. This surgery can be performed as outpatient care under local anesthesia.2,11

One study found that about 40 percent of lesions returned after local excision. This is a much better outcome than treatment with incision and drainage.4

Wide margins (areas) around the lesions are removed to be sure no diseased tissue remains. Some doctors recommend having wide excision early in the course of HS to prevent the disease from spreading further.1,12

A research study shows that less than 30 percent of lesions returned after 6 years of follow-up. Although the surgical areas remain disease-free, HS may appear in new areas.4

Plastic surgery techniques with skin grafts and flaps are used to repair the large surgical wound created by wide excision. These methods can speed healing, but lesions may be more likely to come back than when the wounds are left open to heal under a dressing.3,4,10

Antibiotics are used before and after surgery to prevent infection. People with HS who have surgery to remove lesions in the armpit should begin physical therapy soon after surgery. This helps prevent contracture (permanent tightening of tissues that makes it hard or impossible to move nearby joints) and preserve shoulder mobility.13

Laser therapy is used in addition to other HS treatments to reduce flares from happening, mostly in the groin and armpits.2,6

People with mild to moderate HS benefit from reducing the number of hair follicles and bacteria with an Nd:YAG laser. Designed for hair removal, the Nd:YAG laser decreases the severity of lesions by up to 73 percent.1,6

Those with more advanced to severe HS have better results with CO2 laser vaporization and excision of sinus tracts. Since the CO2 causes less bleeding than conventional surgery, it makes it easier for the surgeon to see the full extent of diseased tissue. Lesion recurrence rates are low.1,6

People with HS also report less scarring and pain from CO2 laser surgery than from previous conventional surgeries or from HS itself.14

Treatments with both lasers have low complication rates. The most common side effect is pain in the treated area. Research shows that people treated with laser surgery felt their lesions had greatly improved. More than 90 percent would recommend laser surgery to others with HS.6