What Areas Does HS Affect?

Small, somewhat itchy bumps or large, painful sores may be the first symptom of hidradenitis suppurativa (HS). HS is a painful, chronic inflammatory skin disease. Recognizing the sites of HS bumps should improve early diagnosis and help you get the right treatment.1

Where are the bumps or sores found on the body? 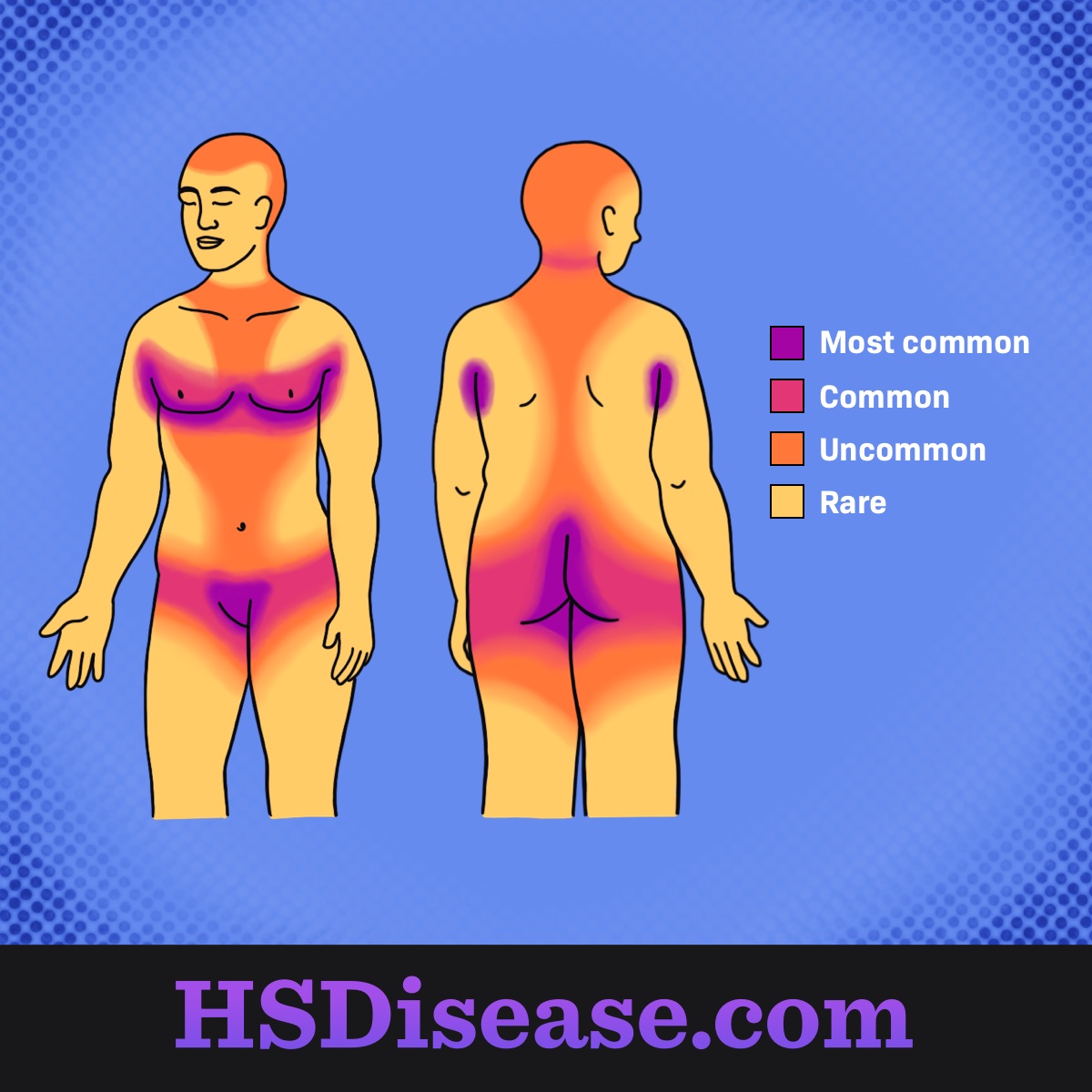 The armpit is the most common location of HS bumps. Other affected areas, from most common to least common, include:2

As the disease worsens, bumps also usually appear where parts of the body rub against another. This may be the nape of the neck, the inner thighs, below the breasts, and around the waist.4

Other fairly common areas for HS bumps are the scrotum and vulva. Stray bumps may occur on the abdomen, especially the area around the belly button.1,3

Many of the affected areas contain apocrine glands and terminal hair follicles. Mostly found in armpits and the groin, apocrine glands are scent glands that become active after puberty. Apocrine sweat is oily, thick, and odorless. The smell comes from decomposing bacteria. Terminal hairs are thick hairs that grow on the scalp and, after puberty, in the armpits, beard, and pubic area.3,5

Sites of HS bumps vary by gender. In women, lesions (sores) are more common beneath the breasts and in the armpits and groin. In men, lesions occur more often on the buttocks, in the area around the anus, on the scalp at the nape of the neck, and behind the ear.6

Bumps or sore locations linked to other factors

Based on areas affected by HS, researchers in France described three groups: axillary-mammary, follicular, and gluteal.7

Consistent with typical HS, this group made up about half of people studied. Members of the group were mostly women. Lesions were usually in the front of the body, in the armpit (axillary) and on the breast (mammary). The people were likely to have raised scars. The other half of people in the study were evenly divided between 2 atypical groups.

In addition to the breast and armpit, lesions of hair follicles in this group were likely on the:

The group had a higher number of men and smokers. Compared with the other groups, they were more likely to have:

In this group, lesions were likely to be on the buttocks (gluteal). The people had papules (solid bumps without pus) and folliculitis (inflammation due to infection in hair follicles). Compared to the axillary-mammary group, they were more likely to be smokers and to have longer disease duration. They had less obesity and less severe disease.

What Is the Connection Between Hidradenitis Suppurativa and Polycystic Ovary Syndrome?

How HS Can Affect Men Differently